skip to main | skip to sidebar

Is it about time you got a little video footage? OK, I will probably have to spend an age uploading all these megabytes, and you will need a splendid broadband connection to receive them, but let's risk it. Here is a short clip taken as “Wrecker Jon” and I entered Poland's motorway network last night. Check your volume is up.. 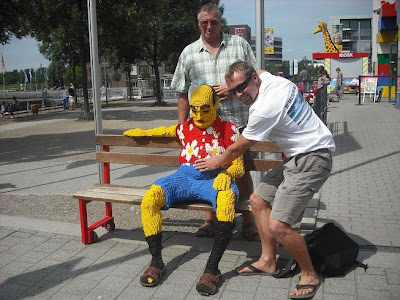 Crossing the border between the cities of Cottbus (Germany) and Wroclaw (Poland), Namibian drives up the wrong filter lane. 'I'm in the shit,' he texts, as Customs explain to him that he's driving neither a car nor a bus. He performs a graceful U-turn.

After a 'full Polish' breakfast of coffee and an extraordinarily sticky bun, we're onto a bumpy road. In fact, it's so uneven that I've put a carrier bag under the diesel cap to prevent spillage. Immediately, there's a sign advising – well, more a legal requirement than advice – that the 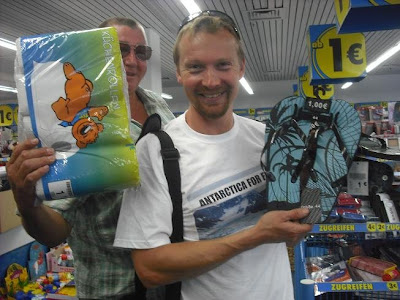 We decide that the overtaking lane offers a marginally smoother ride, but it's still almost impossible to write and drive simultaneously. Grass sprouts prolifically between the lanes, forcing up the tarmac; it's not unlike driving over a cattle grid for an hour. Suddenly we're on a surface in line with Western Europe (excluding Belgium, obviously). Instant gratification is rarely soon enough, but what a relief. Any more road like that and we'd have crushed vertebrae, crabbing sideways to the catering tent on arrival. Blast! There's another section of rally track ahead. 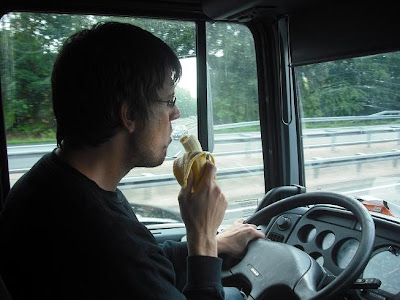 When I'm certain that the bumps are finished, it's time to pull in. Rather than blink hard, resolving to stay alert, it must surely be Wrecker's turn to drive. Another forty winks for me, I think. (As long as I keep his supply of pop topped up, he's content to do most of the driving.) 'I love my Coke for the sugar rush,' Wrecker says. And he regards Sprite or Fanta as a tasty extra, a bit like a drop of diesel additive to make the engine run better. 'Ooh, I must text the Garden Centre,' he says abruptly. 'The hydroponics shop wanted me in on Monday.'..


Posted by barn_thecaretaker at 10:33 No comments: